A.J. Jacobs is an “immersive journalist,” someone who submerges himself completely into a project, then writes about what he learned and experienced along the way. Intellectually, he knew that gratitude was good for him but, being a self-proclaimed pessimist, it was a behavior that didn’t come naturally.

One of his most recent books, Thanks A Thousand: A Gratitude Journey, started with what the author thought would be a very simple way to begin a gratitude practice – saying thank you to everyone involved in making his morning cup of coffee. But when he really began delving into who was involved, he discovered there were literally thousands of people – farmers, chemists, artists, presidents, truck drivers, mechanics, biologists, miners, smugglers, and goat herders –all of whom played a part in his ability to enjoy his morning caffeine ritual.

Laughter is important, not only because if makes us happy, it also has health benefits. And that’s because laughter completely engages the body and releases the mind. It connects us to others, and that in itself has a healing effect. ~Marlo Thomas

There is nothing quite as enjoyable or amazing as laughter. The ability to laugh is an incredible gift. Laughter doesn’t need to be learned, it’s an innate ability that we all possess, from the youngest baby to the oldest adult. As Charles Dickens once said, “There is nothing in the world for irresistibly contagious as laughter and good humor.”

Laughter takes many forms, from a giggle to the full-blown, doubled-over, can’t breathe belly laugh. Laughing allows us to let go of our stress and tension, release anxiety and live in the moment. Laughing is therapeutic and lifts our spirits. In addition to being the best medicine, its also an instant vacation! END_OF_DOCUMENT_TOKEN_TO_BE_REPLACED

Giving thanks. It’s easy to forget and it’s easy to take for granted those people in our lives who we truly care about. When we tune in and feel gratitude it opens our hearts and brings us to a plane where true joy happens.  The most important place to feel and express gratitude is in our most important relationships. Yet, often we take those relationships for granted. What would happen if we took a few minutes each day to give thanks to our partners, children, family? I think that a lot of insignificant gripes would drop away. Seeing and expressing gratitude has a way of moving us to step back, see the bigger picture and remind us what we really want. Open your heart. Give thanks. See what happens.

How would you like to show gratitude to the people you care about? 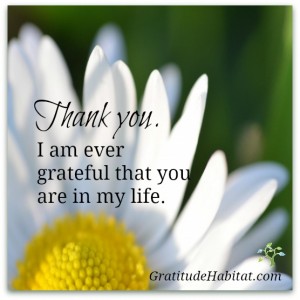 It’s Good To Be Grateful!

Robert Emmons, noted researcher in the psychology of gratitude, was asked what were the three key things he wanted people to know about gratitude. “First, the practice of gratitude can increase happiness levels by around 25%. Second, this is not hard to achieve–a few hours writing in a gratitude journal over 3 weeks can create an effect that lasts 6 months if not more. Third, cultivating gratitude brings other health effects, such as longer and better quality sleep time.”

25% happier? Sounds good to me! Then, a little time journaling our ‘gratitudes’ for long lasting effects along with better health? That’s a pretty good deal for the amount of effort.    END_OF_DOCUMENT_TOKEN_TO_BE_REPLACED

People like being appreciated. Every gift deserves a thank-you, whether it is a material object, a referral, or to express your appreciation for someone’s friendship, acceptance or support.

Although occasionally a thank you email will do, a handwritten note expresses a completely different level of appreciation. It takes added effort and planning (but not much) to actually pen and mail a thank you card, letter or postcard. Even if your handwriting is poor, still hand-write your notes. Do not type them or use a word processor.

Writing thank-you notes is easier than you remember them being as a kid (when your mom had you write thank you cards for every birthday gift received).  END_OF_DOCUMENT_TOKEN_TO_BE_REPLACED

Twenty years from now you will be more disappointed by the things you didn’t do than by the ones you did. So throw off the bowlines, sail away from the safe harbor, catch the trade winds in your sails. Explore. Dream. Discover. ~ Mark Twain

To fully experience life, we must take risks. Risk means getting out of our comfort zone and that is different for every person. It means taking a chance to explore, dream, discover and yes, even fail.